The legend of Ferrari began with a man, Giulio Ferrari, and his dream of creating a wine in Trentino capable of competing with the best French Champagnes.
He was a pioneer; it was he who was the first to realize the extraordinary vocation of his area, and it was he who first made substantial plantings of Chardonnay in Italy. He started to produce a few highly select bottles, with an obsessive attention to quality.
As he had no children, Giulio Ferrari began looking for a successor to whom he could entrust his dream. Among many candidates he chose Bruno Lunelli, owner of a wine shop in Trento. Thanks to his passion and entrepreneurial talent, Bruno Lunelli succeeded in increasing production without ever compromising on quality.
Bruno Lunelli conveyed his passion to his sons; under the leadership of Franco, Gino and Mauro, Ferrari became the market leader in Italy and the nation’s celebratory wine par excellence.
The third generation of the Lunelli family is keeping the Ferrari dream alive. Marcello, Matteo, Camilla and Alessandro lead the company with the aim of combining innovation and tradition, taking Ferrari around the world as ambassadors of the Italian Art of Living.

From obsession with excellence, cultivated for over a century, comes this Trentodoc that promises to become Italy’s iconic rosé sparkling wine. A brilliant salmon colour, with coppery highlights that verge towards coral. The perlage hypnotizes you with its fine and abundant bubbles. Delicate hints of wild-rose jam and citrus fruits mingle with spicy and mineral notes, offering an immediate sensation of pure and intense pleasure. It strikes you with its vivid intensity. Its very concentrated fruit is balanced by the fresh burst of tanginess that gives it extraordinary length on the palate and creates a perfect all-round taste profile.
€ 350.00
2007
0,75 lt 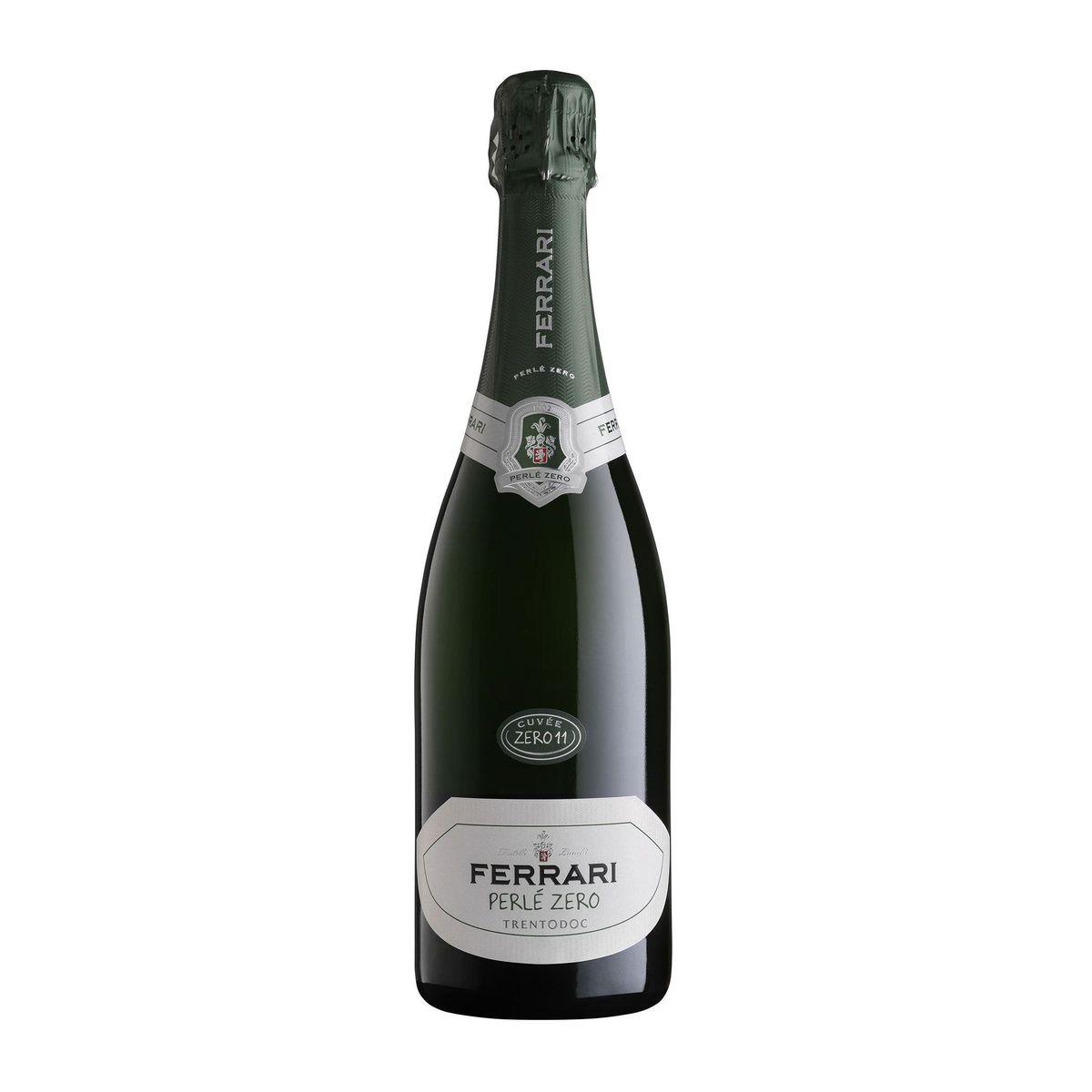 A Trentodoc without any dosage, which expresses the very essence of Chardonnay from mountainside vineyards. COLOUR AND PERLAGE: The refined perlage is swathed in gleaming golden highlights. NOSE: The extremely clean aromas on the nose reveal notes of grapefruit, ginger root and fresh pineapple, subsequently giving way to hints of aromatic herbs and cumin. PALATE: On the palate the wine is dry, tangy and lively, characterized by an attractive initial mellow sensation that gradually shades into a long flavour of zesty fruit, thus offering a taste profile that is at once clean, deep and elegant.
€ 58.00
2011
0,75 lt 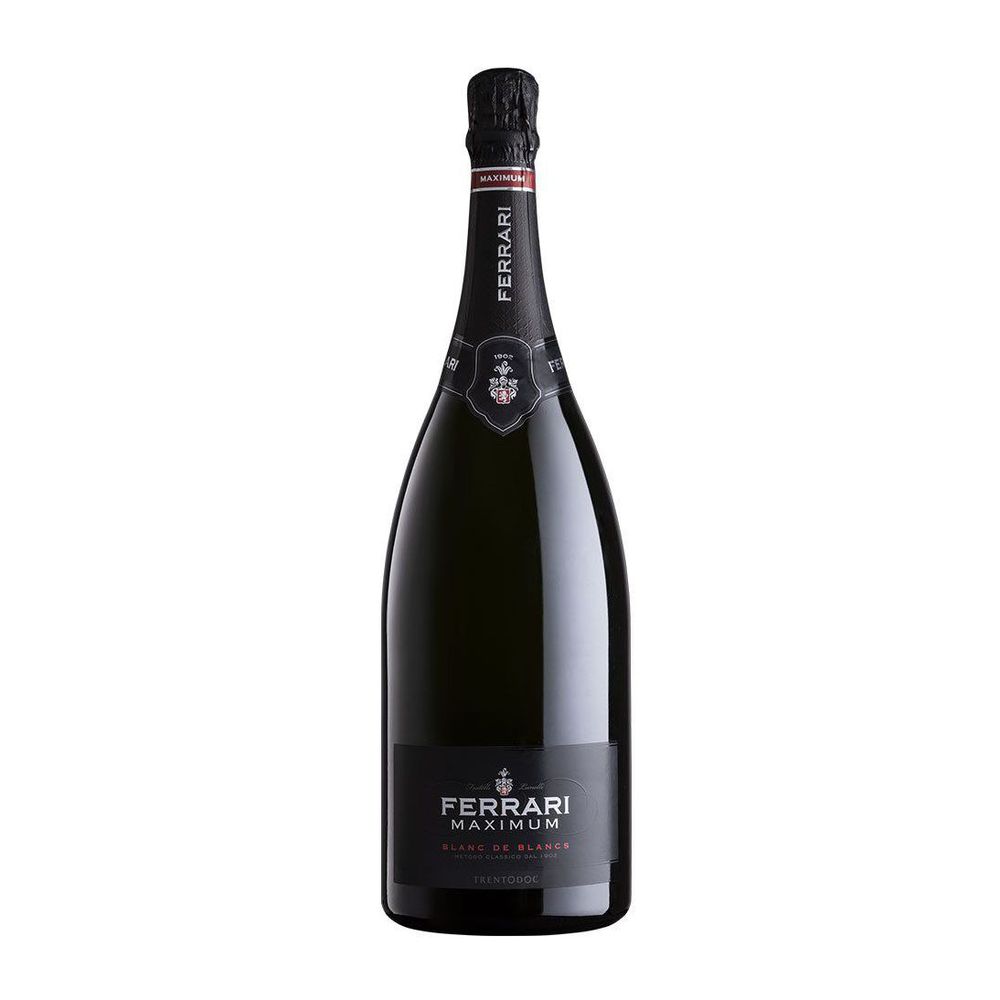 The first wine produced by Giulio Ferrari at the beginning of the 20th century is still a Blanc de Blancs of unmistakable style, which wins you over with its freshness and fruity fragrance. COLOUR AND PERLAGE: A brilliant straw yellow,with remarkably persistent perlage. NOSE: Sensations of apple, underpinned by tones of biscuit and citron. Amidst the notes of ripe fruit one finds pleasant hints of crusty bread, deriving from its more than three years’ageing on the yeasts. TASTE: A fresh and lively flavour, enhanced by the velvety softness of the bubbles. The typical fruity notes of Chardonnay combine with fragrances of yeast.
€ 48.00
1,5 lt 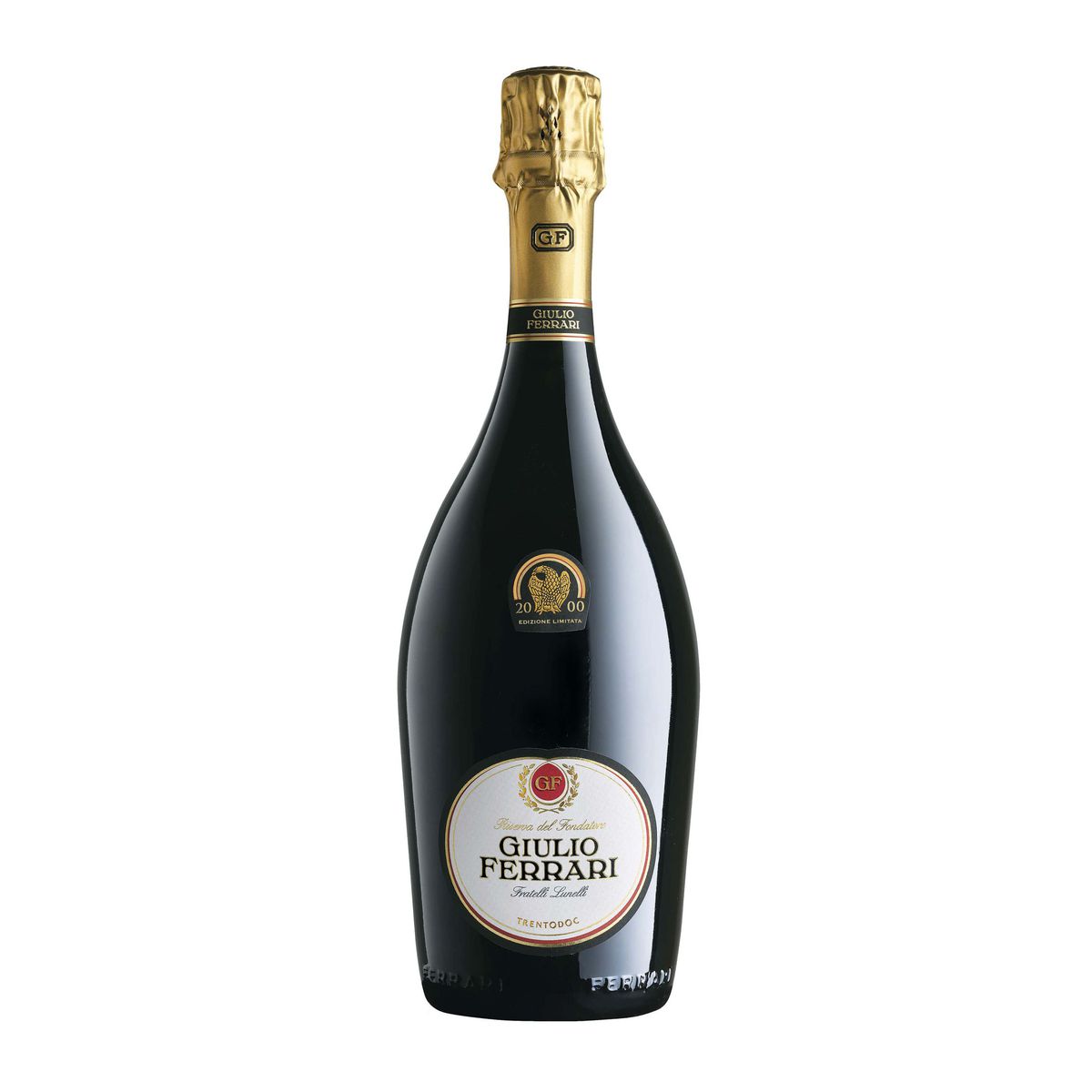 This is the label that identifies the best Italian sparkling wine in the world, able to meet the challenge of time and become truly legendary. COLOUR AND PERLAGE: A Chardonnay with delightful golden highlights against a background of brilliant yellow. The perlage is extraordinarily fine and persistent. NOSE: An intense and complex bouquet, with marked mineral notes and enriched with exotic scents. Hints of white chocolate and hazelnut give way to balsamic notes and intriguing tones of spices, beeswax and honey. TASTE: Sumptuous suggestions arise from its creamy, velvety body, with hints of acacia honey accompanied by notes of exotic fruit. The over ten years of ageing on the lees yield a finish of great complexity, which amazes you with its elegance and freshness.
€ 300.00
2000
0,75 lt

Along with a lively, brilliant old rose colour with salmon-like nuances, the wine reveals a refined perlage in the glass. The nose is rich and multi-faceted, offering suggestions of cherry, dog rose and orange, combined with an initial hint of vinosity, a touch of talc and a whiff of peach kernels. On the palate, the wine displays rich, full, potent and chewy fruit, whose concentration, depth and balance make it very appealing and satisfying to drink. The finish offers hints of red fruits and spicy bread. A normal start to the spring was followed by a period of exceptional rainfall, which really put the vine growers’ skills to the test. The weather conditions stabilized with the onset of summer and the sunshine brought with it renewed peace of mind and optimism in the vineyards. Bud-break was late (as was flowering), but it was homogeneous and regular. The ripening of the grapes during August was slow, resulting in a relatively late harvest with slightly higher yields, healthy grapes and excellent quality.
€ 42.00
2014
0,75 lt

From our obsession with excellence, cultivated for over a century, comes this Trentodoc that promises to become Italy’s iconic rosé sparkling wine. Colour and perlage: A brilliant salmon colour, with coppery highlights that verge towards coral. The perlage hypnotizes you with its fine and abundant bubbles. Nose: Delicate hints of wild-rose jam and citrus fruits mingle with spicy and mineral notes, offering an immediate sensation of pure and intense pleasure. Taste: It strikes you with its vivid intensity. Its very concentrated fruit is balanced by the fresh burst of tanginess that gives it extraordinary length on the palate and creates a perfect all-round taste profile.
€ 350.00
2006
0,75 lt

From the Chardonnay vineyards that surround Villa Margon comes this vintage Trentodoc whose maturation in oak adds richness and extraordinary complexity of flavor. Colour and perlage: Chiselled gold, with a very fine perlage. Nose: Floral perceptions alternate with citrus-like exotic fruit tones. Notes of crusty bread, pineapple and lemon cream are accompanied by spicy sensations and suggestions of rosemary, with hints of honey and hazelnut brittle. Taste: A perfect balance of fruity and toasty yeast sensations. The large Austrian oak casks give the wine added structure and a long finish.
€ 50.00
2009
0,75 lt

From strictly selected Chardonnay grapes from the Lunellis’ own vineyards. A vintage Trentodoc that is seductively versatile, delightfully harmonious and amazingly elegant.
€ 37.00
2010
0,75 lt

The first and only Blanc de Noirs of the Company. This vintage wine is the result of forty years’ experience of a variety as complex and delicate as Pinot Noir. Colour and perlage: Bright golden highlights, embellished by perlage of rare finesse. Nose: Spectacular complexity on the nose, full of tropical sensations and scents that range from fruity to mineral and even toast-like, with intriguing notes of peanut butter. Taste: Sumptuous in taste, framed by razor-sharp tanginess and a citrus-like freshness. The flavour is full and rounded. Persistent and exquisitely almondy, with a beguiling and majestic finish.
€ 68.00
2010
0,75 lt

The best Chardonnay from the family’s vineyards is used to make this vintage Trentodoc; it is the wine that best summarizes the art of Ferrari. The phrasing of its taste is highly elegant, with a crescendoing finish.
€ 65.00
2013
1,5 lt 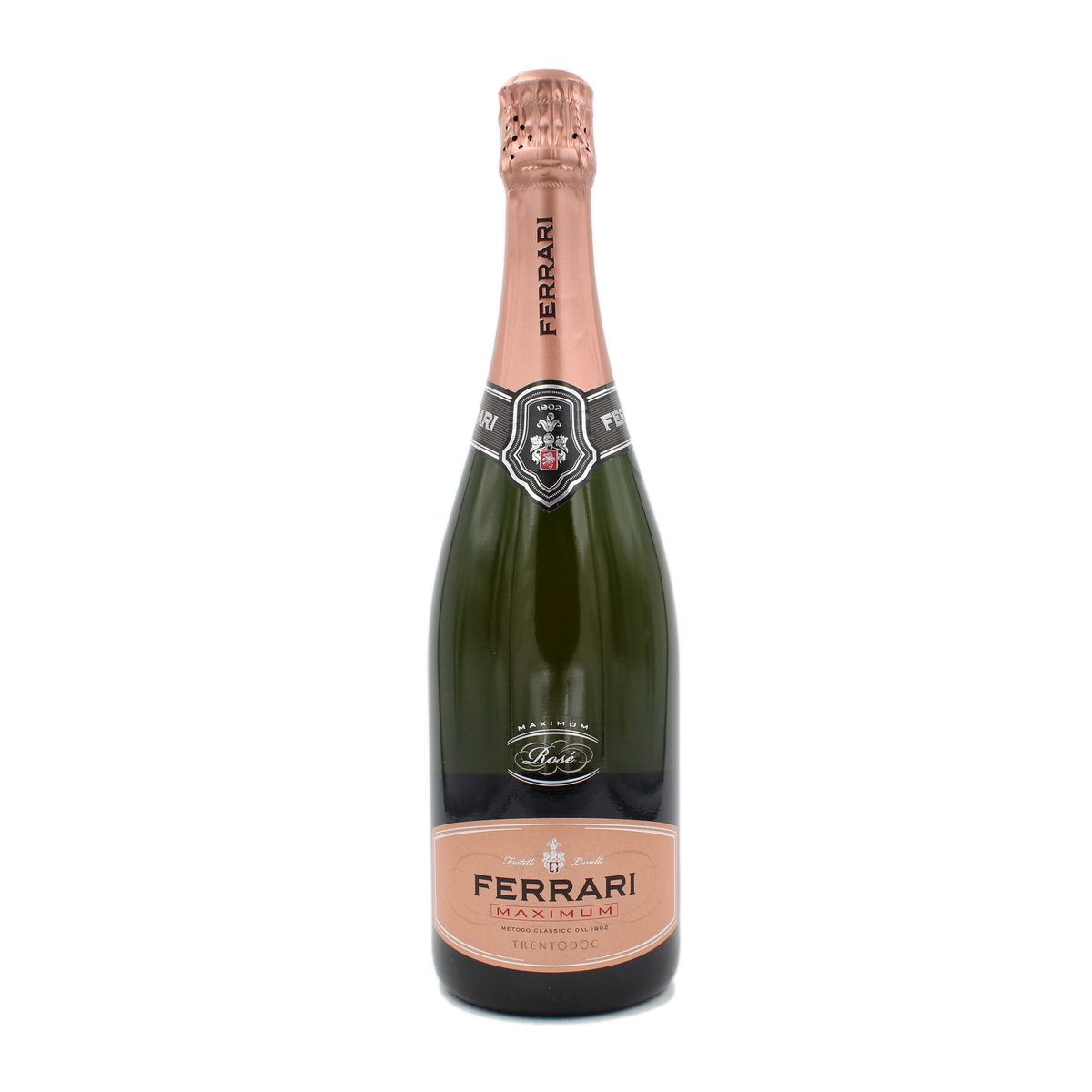 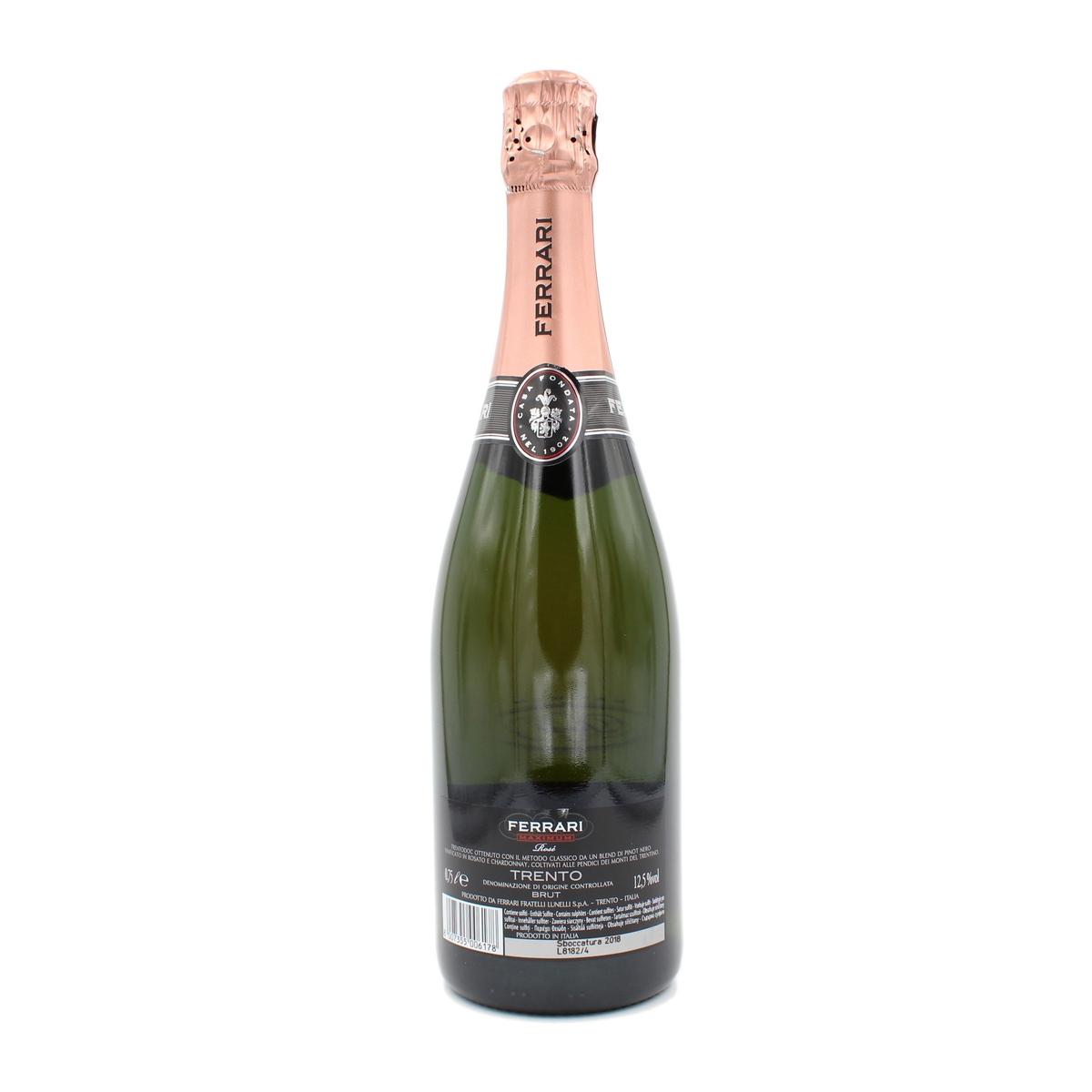 There are fragrances of berries in this versatile and velvety Trentodoc. The pink highlights of its bubbles in your flute will accompany an entire banquet. Colour and perlage: Elegant old rose hue and a persistent perlage. Nose: A delicate fragrance with hints of yeast, deriving from more than three years’ ageing in bottle, and the sensations of berries that are typical of Pinot Noir. Taste: A succulent mellowness, rich tanginess and intriguing vinosity; the notes of raspberry, wild strawberry and violets are accompanied by hints of brioche on the finish.
€ 26.00
0,75 lt

The best Chardonnay from the family’s vineyards is used to make this vintage Trentodoc; it is the wine that best summarizes the art of Ferrari. The phrasing of its taste is highly elegant, with a crescendoing finish. Pale golden highlights adorn its straw yellow colour. The perlage is extremely fine and persistent. Aromatic richness of extraordinary expressiveness: the scene is dominated by hints of Reinette apples and citrus fruits, accompanied by tones of white peach, almond blossom and toast-like notes. Elegant and harmonious, with the unmistakable fruity, aromatic sensations that are typical of Chardonnay. These are followed by a slightly almondy finish of great persistence, the result of long ageing on the yeasts.
€ 32.00
2014
0,75 lt
Rosè Sparkling
USE THE "WELCOME10" COUPON CODE TO GET A 10% DISCOUNT