Ama takes its name from a small borgo, or agricultural hamlet, nestled in the hills at an altitude of almost 500 metres. Five centuries ago, it was the hub of a florid farming and winemaking business overseen by a group of local families. “The road from Radda leads to Amma, three miles away on a hill and home to the Pianigiani, Ricucci and Montigiani – the most prominent families in Chianti,” wrote Grand Duke Peter Leopold of Habsburg-Lorraine in his 18th-century Report on the government of Tuscany. “They are well-off country gentry that spend all their income on farming and vineyards, and take care of everything. The hills and valleys surrounding the castle of Amma are the most beautiful in all of Chianti, superbly tended with fertile grain fields, olive groves and magnificent vineyards.” The Grand Duke’s visit is commemorated by a plaque on one of the buildings in the borgo, which are now owned by the winery. CASTELLO DI AMA , the winery, was founded in the 1970s by a group of families who had fallen under the spell of this magical spot. They set themselves the task of reviving Ama’s past glories and of producing a Chianti Classico that would rank among the world’s most prestigious wines. 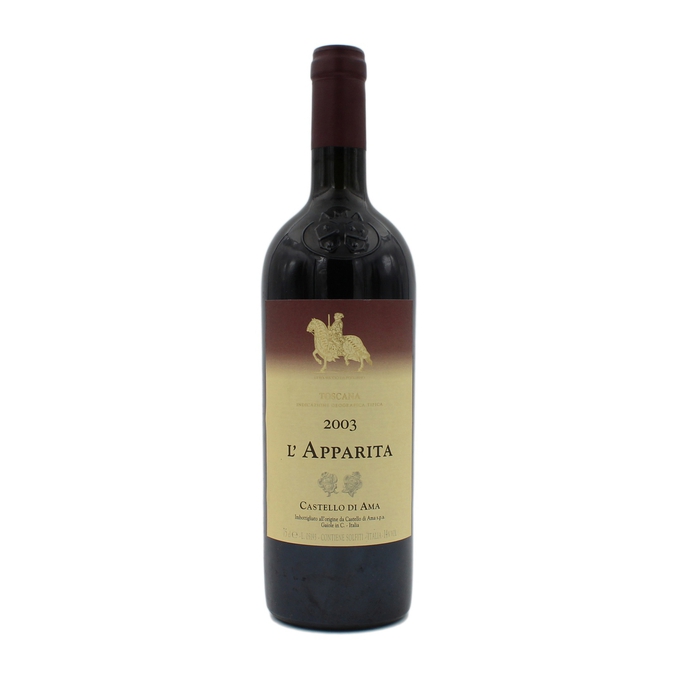 L’Apparita was Tuscany’s first pure Merlot and has been a cult wine since its very first vintage, in 1985. The small parcels that make up the 3.84 hectares of the L’Apparita vineyard are set atop the Vigneto Bellavista hill, at an altitude di 490 metres asl. In 1975 they were planted with Canaiolo and Malvasia Bianca, then grafted over with Merlot clone 342 between 1982 and 1985. The vines are trained as open lyre and the soil is clay rich, making this tiny cru a real gem in the world of winemaking.
€ 170.00
2003
0,75 lt
USE THE "WELCOME10" COUPON CODE TO GET A 10% DISCOUNT