Tenuta San Guido is named after the Saint Guido della Gherardesca who lived during the XI century. It is located on the Tyrrhenian coast, between Leghorn and Grosseto, in Maremma an area made famous by Italian Nobel prize winner Giosuè Carducci, and it stretches for 13 km from the sea to the hills.

The latter have been given their own DOC, the DOC Bolgheri Sassicaia, the first, and so far only case in Italy of a DOC contained in one estate.

The wedding of Mario Incisa della Rocchetta and Clarice della Gherardesca on October 18th 1930 started it all.

They shared a love for thoroughbred horses that made them form a partnership with horse breeder and trainer Federico Tesio. Mario Incisa's love of good wine made him plant Cabernet vines in 1942 for what was to become Sassicaia. Seventeen years later the Bolgheri Bird Sanctuary becomes Italy's first private nature preserve.

Le Difese, Toscana IGT, is produced by Tenuta San Guido since 2003. It is a 70% Cabernet and 30% Sangiovese blend. The wine is distinguished by a good structure and is extremely supple making it very pleasant and drinkable.
€ 23.20
2016
0,75 lt 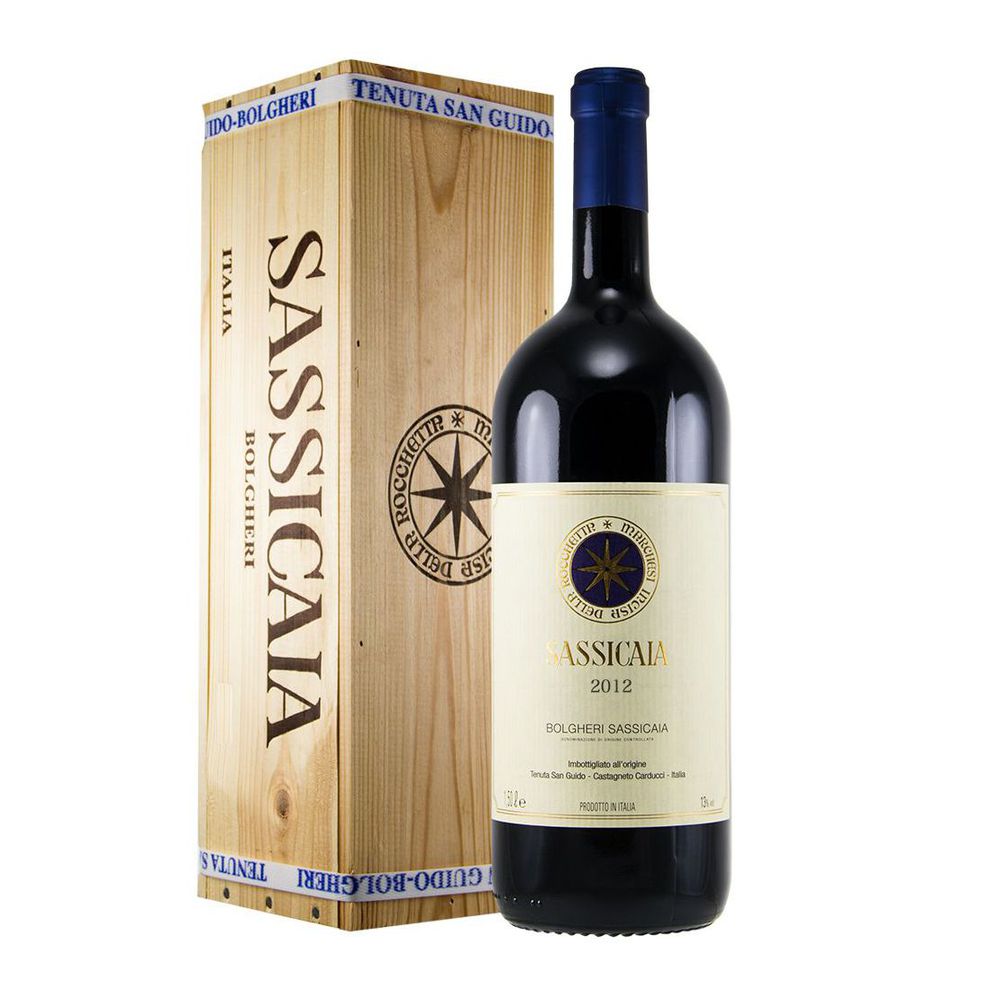 The climate for the 2012 vintage was rather special. Autumn and Winter were long and cold, to the point that at the end of January the Bolgheri hills were covered with snow. Bolgheri experienced a cold, yet rainless fall and winter, which was not the case for other parts of Tuscany. Cold temperatures were favorable for the halting of the vegetative growth and the natural elimination of some pests of the vine. The spring started with a slight delay, causing the vines to bud 10 - 15 days later than the seasonal average. From the beginning of May, however, the temperatures rose and accelerated the arrival of summer. June rainfall partially reconstituted the water reserves of the soil. The summer was very hot, with sunny days and temperatures above the seasonal average. Although some have likened the summer of 2012 to that of 2003, the difference lies in the considerable fluctuations in temperature between night and day which prevented water stress in plants in 2012. During the fruit set period, strong sea winds were partially responsible for a production loss of about 10%. The summer was long, with very high daytime temperatures requiring an early harvest of part of the Cabernet.
€ 700.00
2012
1,5 lt 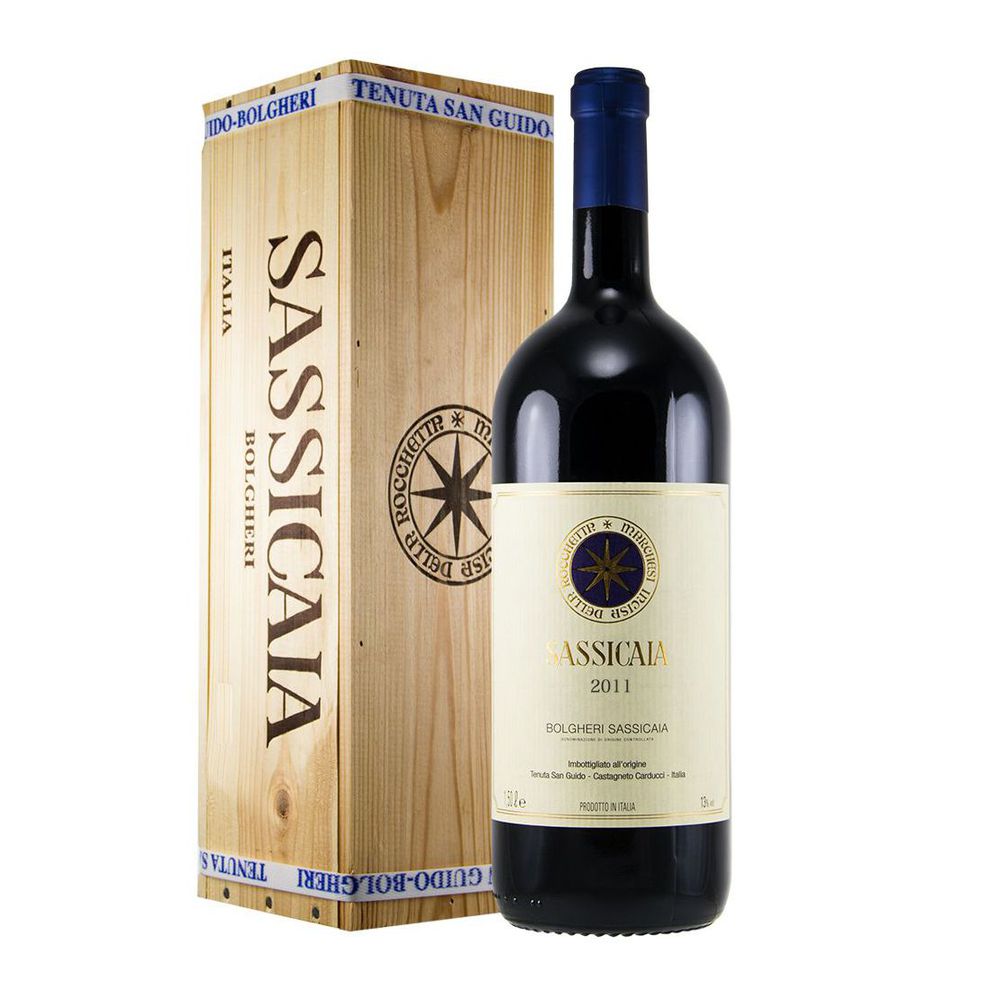 The climate trend in 2011 was truly exceptional for Bolgheri. It can be considered one of the best vintages since the year 2000. The winter was cold, with temperatures below the seasonal average, especially in November and January. The Spring started early with mild temperatures and an excellent water supply due to gradual windless rainfalls. This led to a great vegetative growth of vines. The summer was long and hot with temperatures in the seasonal averages, except in July when it was warmer. Thanks to sufficient temperature excursions between night and day, due to the proximity of the sea, the plants didn’t suffer and the grapes were not overly mature.
€ 700.00
2011
1,5 lt 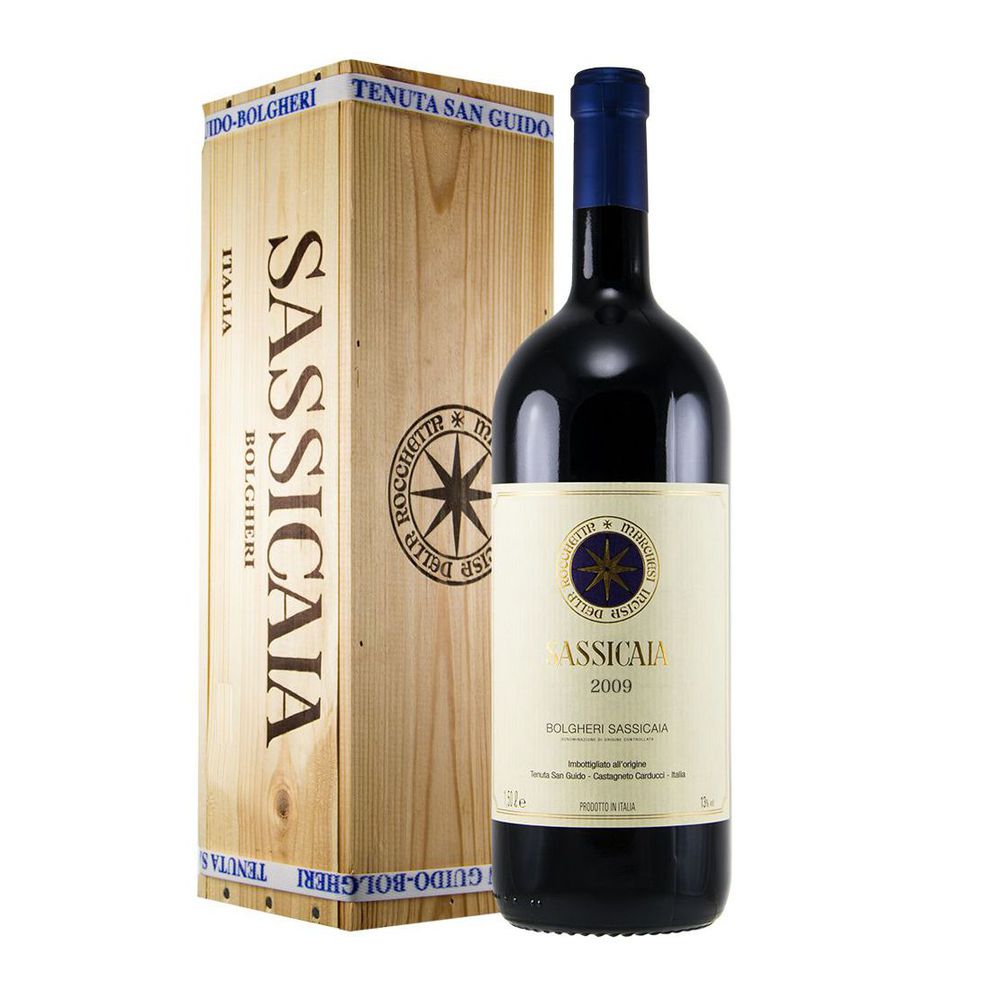 Sassicaia 2009 is just perfect. And every word can only seem unnecessary and restrictive in front of the magnificence of the wine. Complex nose, broad and multifaceted, crisp fruit, herbs and roots, berries, iodine. Tannin and acidity, bursting, structured and elegant, sinuous, a chiaroscuro that shows itself and retracts in a wonderful game of seduction.
€ 700.00
2009
1,5 lt 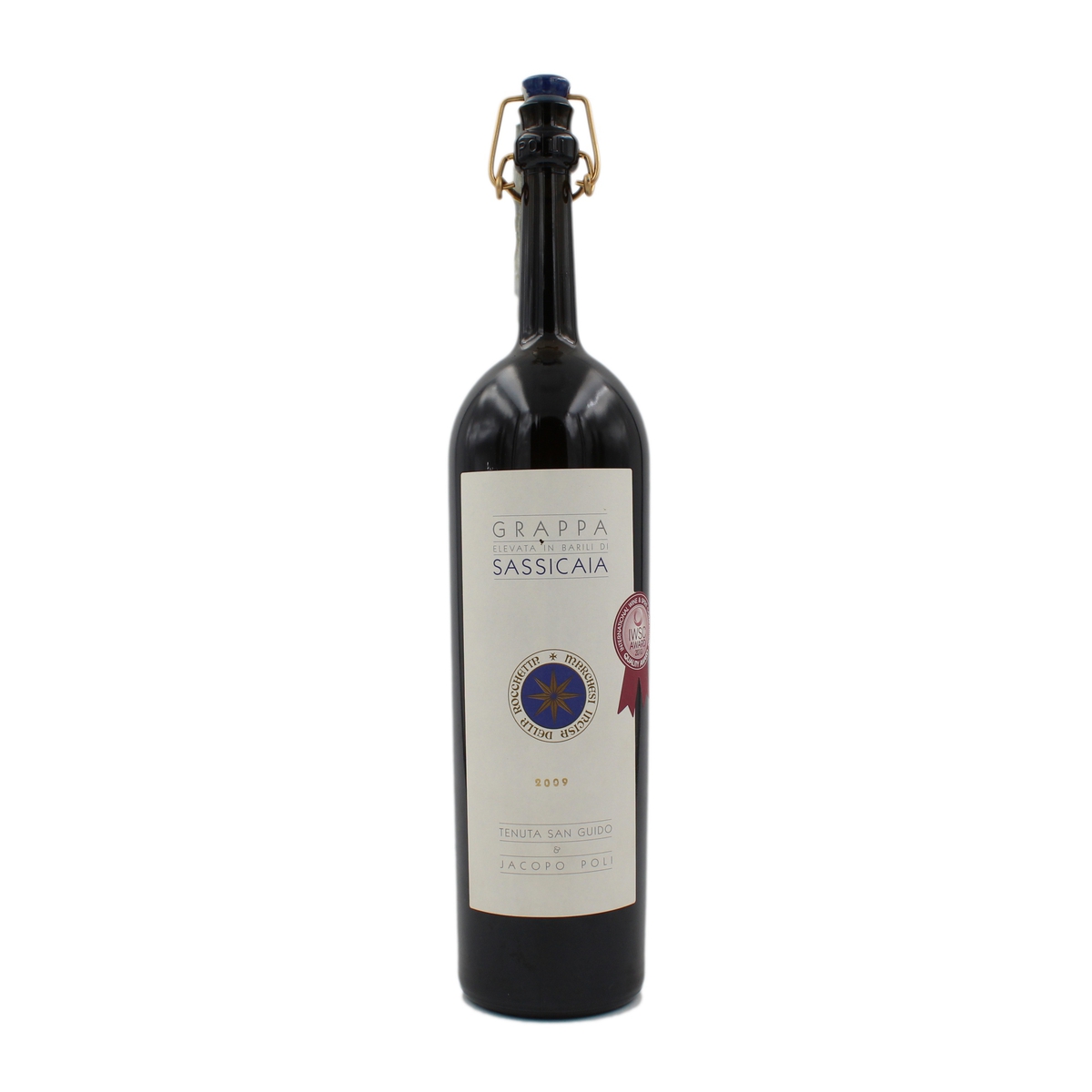 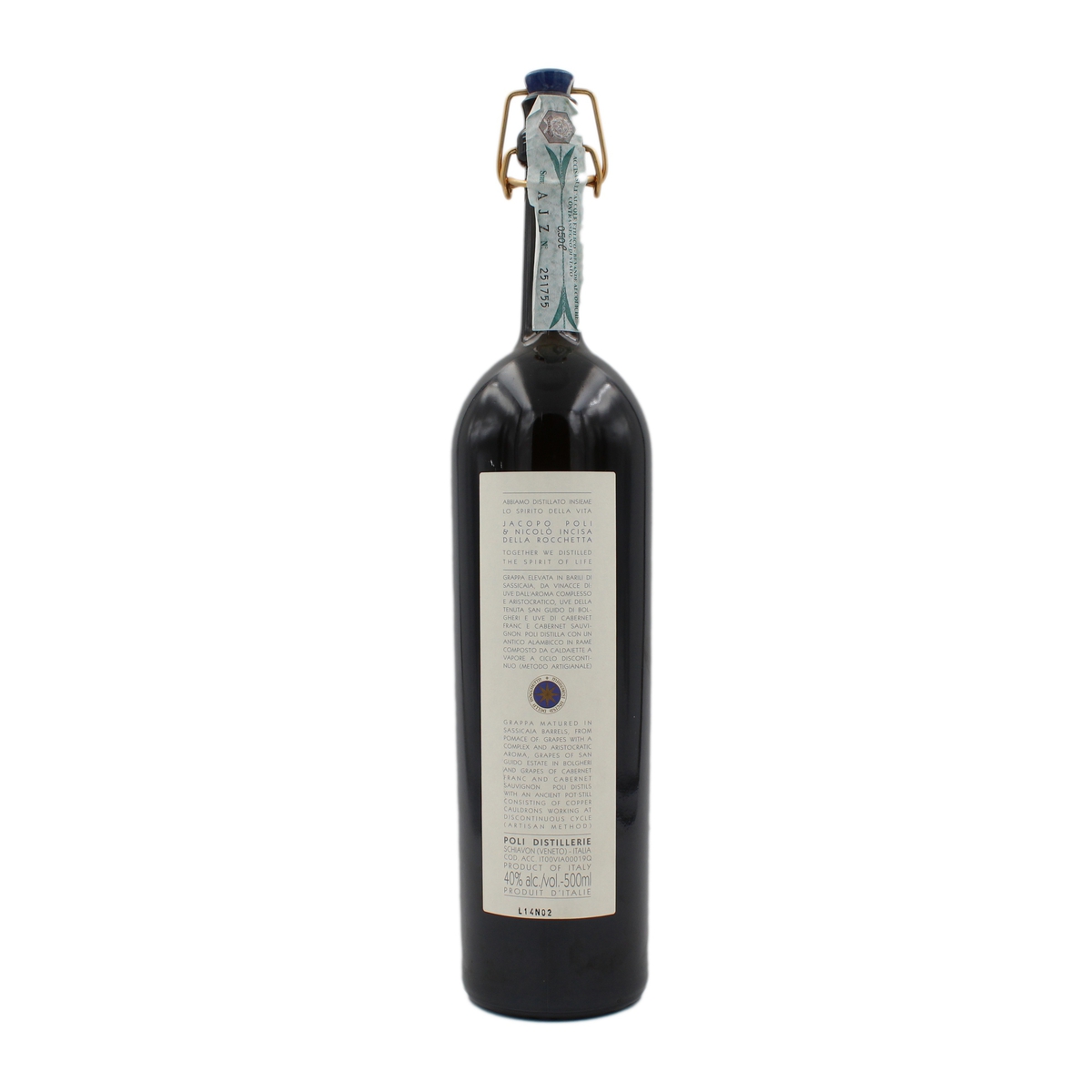 Single vintage Grappa from marc with an intense and aristocratic aroma distilled in small batches by means of steam, finished in the oak barrels in which the Sassicaia wine was previously refined.
€ 85.30
0,50 lt 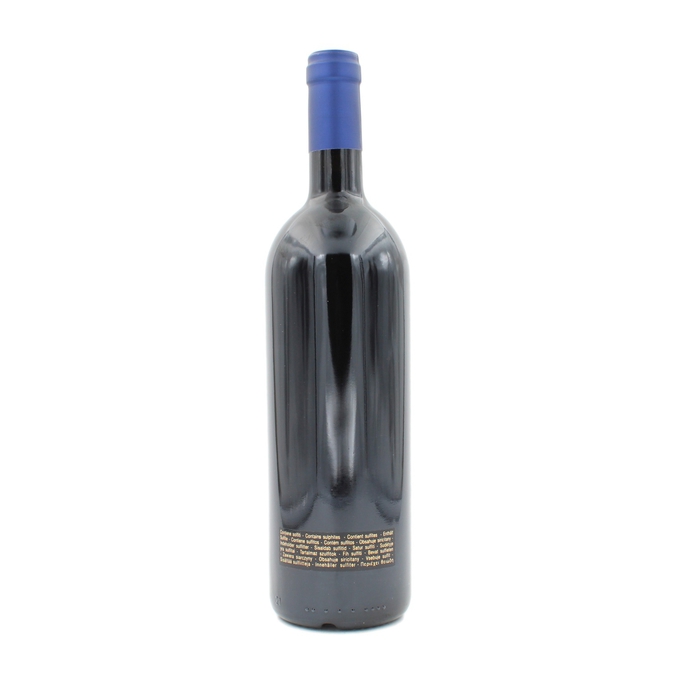 2016 is a vintage worthy of praise, considered by some even better than the exceptional 2015. The autumn was characterized by an unusually warm and dry climate, except for some rare abundant rains. Proper winter started in late November with cold temperatures that remained low both day and night, until the whole month of January. February, on the other hand, was more humid and with a slight increase in temperatures. These precipitations were essential to ensure the water reserve of the subsoil and guaranteed the vine's wellbeing over the summer. At the beginning of April, the sharp rise in temperatures anticipated the sprouting of about 8-10 days. The proper arrival of the summer happened during the second half of June, with beautiful sunny days and summer temperatures. Those remained in the seasonal average with the exception of the second decade of July, which was very hot. The veraison began at the end of July and the following weeks ensured an optimal phenolic and alcohol ripening of the grapes, allowing a longer permanence of the grapes on the plants. Some nocturnal rains that occurred in August offered refreshment to the plants and washed the grapes, while the cool night breezes, conditioned by the sea, have accentuated the development of the perfumes and guaranteed freshness and fragrance of the grapes that have gradually matured, without excess sugars. The harvest was carried out, thanks to the optimal conditions, until the first decade of October. The healthy and intact grapes, homogeneously matured, that were brought to the winery, gave an optimal response in organoleptic terms. Great extraction in terms of color and anthocyanic structure, combined with an extraordinary aromatic component, elegant and subtle tannins are the distinguishing features of this Sassicaia vintage.
€ 450.00
2016
0,75 lt 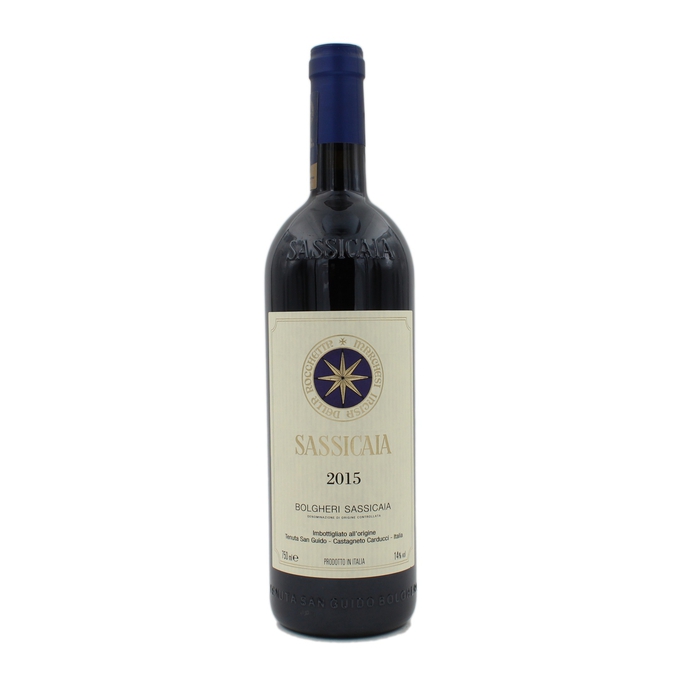 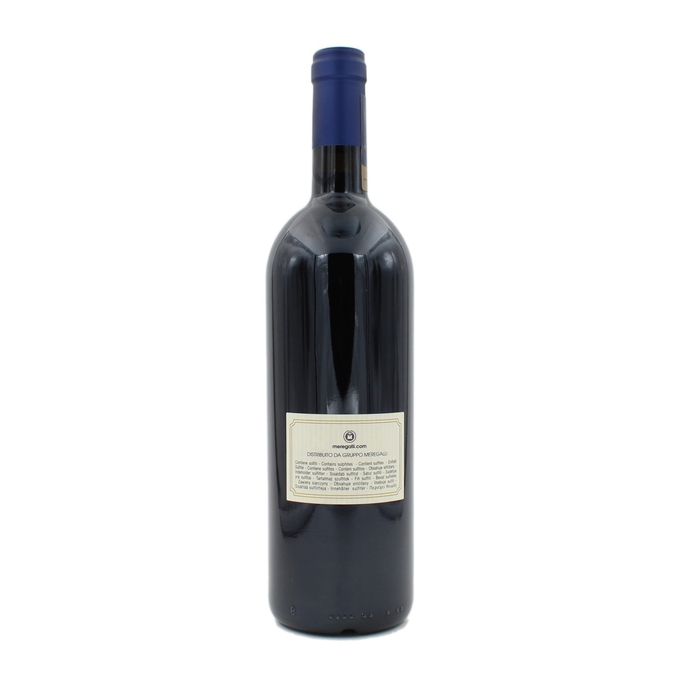 A very good vintage that influenced in a very positive way the wines of 2015. After a rather mild winter with colder temperatures in January and February and heavy rains, during the second week of April the vines started vegetating thanks to mild temperatures and sunny days. The rains, very abundant in the early spring, brought to a quicker vegetation of the plants and at the same time helped the water reserve of the soils. The flowering was excellent, finished towards the end of May and was followed by a great budding, favored by good climate. June and the first half of July were characterized by temperatures above the seasonal average but from late July the they went back in their usual range. This climatic oscillation was mainly due to some rains that brought fresh air, very useful for the health of the vineyards and consequently for the excellent ripening of the grapes. Thermal excursion between day and night that lasted throughout August guaranteed the excellent phenolic ripeness of the grapes.
€ 450.00
2015
0,75 lt 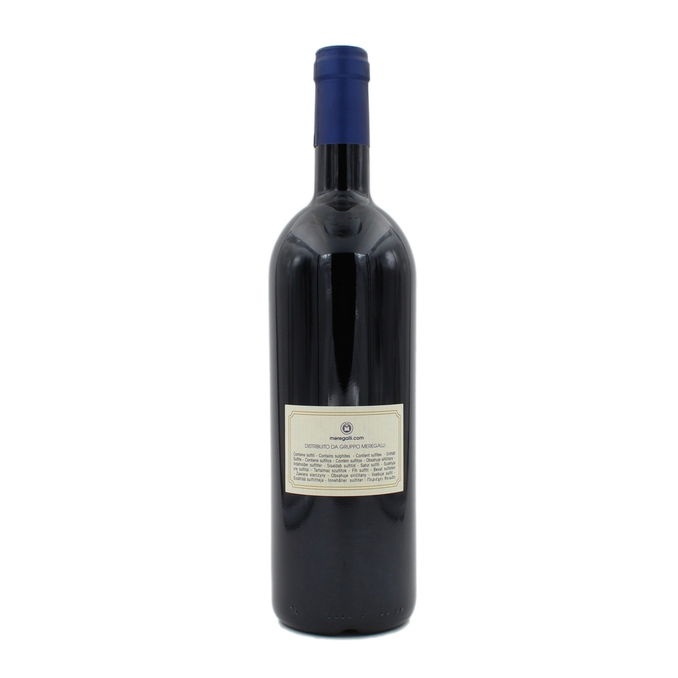 In Bolgheri the 2014 vintage was unlike other wine areas as precipitation was scarce. The slow maturing of the Cabernet grapes helped the phenolic ripening producing distinctive aromas and flavours never achieved in other vintages. The winter season was quite mild with frequent rainfall while the spring started late. The heat in May favored a good budding and the summer was warm until the end of July. In the month of August the temperatures were lower than the seasonal average. The maturation therefore was slowly and gradually accomplished, although delayed. This favored aromatic extraction. The late summer rains did not harm the grapes that were monitored and cared for by the agronomists. As a result of slow maturation and favorable climatic conditions the wines appear to be harmonious with moderate alcohol content, a style that reflects the philosophy of Tenuta San Guido.
€ 300.00
2014
0,75 lt 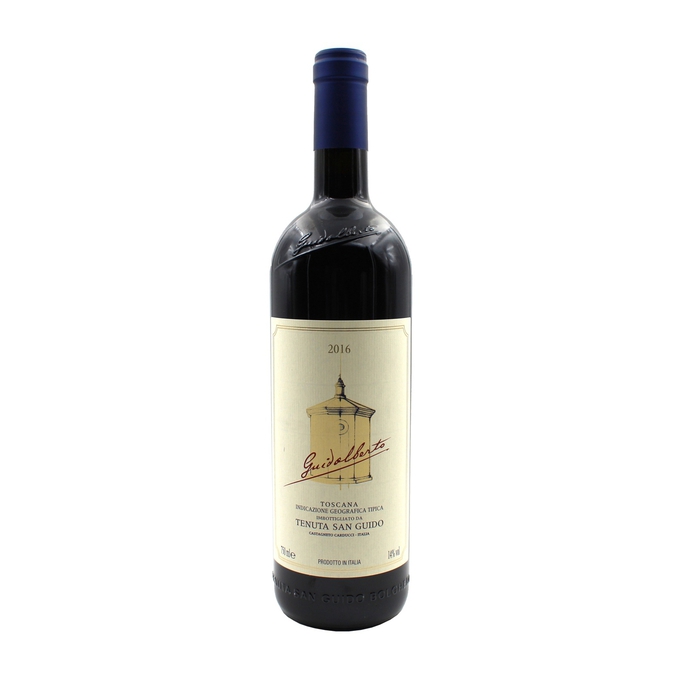 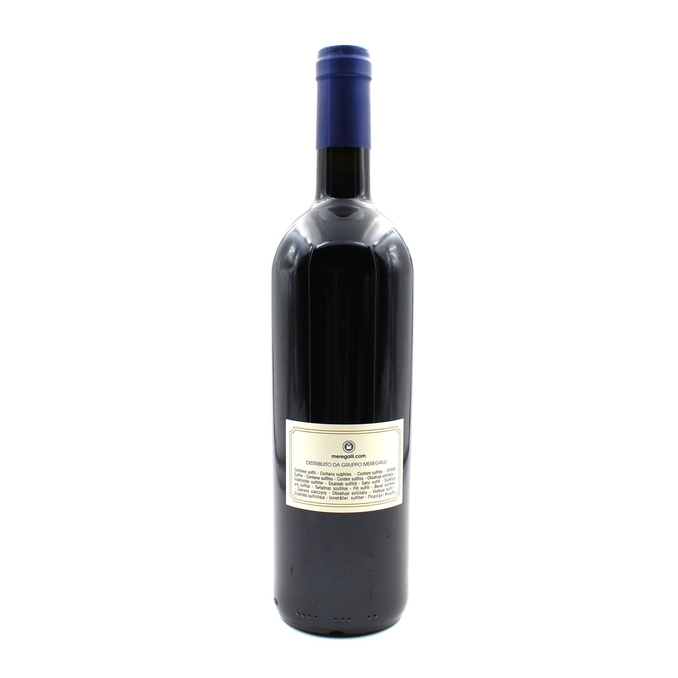 The 2016 vintage is considered one of the best of the last decade. An unusual warm and dry autumn, was followed by a rather rainy winter with low temperatures on the final part of the season, especially in February when rains and cold temperatures were below the seasonal average. In mid-April the rise of the temperatures caused an early sprouting of the vines (about 10 days earlier). The early spring was characterized by an alternation of rainy and sunny days with temperatures slightly below the seasonal average until mid-June, when summer finally arrived with temperatures above 30-32 ° C. Summer days were quite hot but never dry thanks to the strong ventilation during the day and the very positive climate excursion between days and nights. Thanks to these factors and to the good water supply of the soils, vines did not suffer any water stress. Grapes were well distributed on the plants with an homogeneous size of the berries. At the end of July some rains have brought further refreshment to the vines and helped to clean the grapes. The season continued with sunny days and temperatures in the seasonal averages until the ripening of the grapes was completed.
€ 43.80
2016
0,75 lt
Red Spirits
USE THE "WELCOME10" COUPON CODE TO GET A 10% DISCOUNT